The Croods: A New Age hit theaters Wednesday and is exceeding expectations. Let’s take a look at some reactions from the weekend:

Although with over/under $36 million worldwide by Sunday (and most of its overseas territories still to come), the $65 million-budgeted Croods 2 may yet qualify as a hit even before accounting for its PVOD launch next month [my emphasis].

With as much as $36 million in North America and China by tomorrow, The Croods 2 may be a rare post-Covid theatrical hit for Hollywood…

I hear yesterday was close to $4M for Croods 2, which shows a typical surge on Black Friday, and the best daily gross for Croods 2 so far. Following Tenet, which made an estimated $10M in its first domestic weekend (Warners never broke that figure out), when significantly more theaters and markets were open, Croods 2 is posting the second-best opening at the B.O. during the pandemic…China, The Croods: A New Age is playing at 10K locales, looking to topple local pics Caught in Time and One Second for the No. 1 spot. The weekend tally is above Hotel Transylvania 3 (+14%), Coco (+15%), Finding Dory (+15), and Toy Story 4 (+18%), in line with Ralph Breaks The Internet and The Incredibles 2. Croods 2 reps the third-biggest MPA opening (after Tenet and Mulan) since cinemas re-opened in the PRC.

Box Office Mojo has some nice daily stats showing just how strong this release is compared to prior weeks during the pandemic: 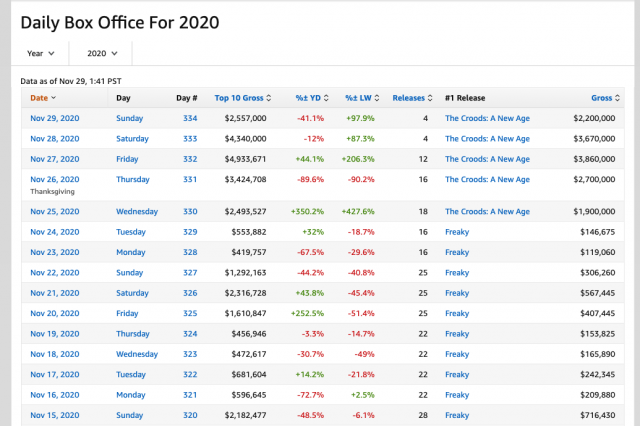 For those not familiar with the movie, A New Age is the sequel to 2013’s The Croods. While this movie doesn’t punch in the same weight class as a Frozen or big kids movie title, it does have some A listers (Ryan Reynolds) and Universal did spend semi-serious budget on the film – $65mm, and marketing appears significant based on TV and other ads. It still has several weeks to go in theaters before it hits PVOD in mid December (check out Universal’s dynamic window deals with AMC and Cinemark – Croods gets at least a 17 day exclusive window, and more if it hits $50mm (which to be clear I don’t think it will do, although this is a good start)).

The relative success of Croods to me is proof that a good family movie will bring people back to theaters in the United States. The movie’s success in China continues to prove that Asian markets are back to box office normal.

I think it’s worth reviewing the news items that have happened in the last few months that paint a very optimistic picture for the movie industry:

– WW1984 opted to do a hybrid release in theaters and on HBO Max. There was a significant speculation prior to this the movie would go straight to PVOD
– Cineworld  (corporate parent of Regal theaters) raised new liquidity, suggesting capital markets remain open for the industry
– Demon Slayer set box office records in Japan and continues to top the charts there
– Croods: A New Age exceeded expectations during the worst spike of COVID cases during the pandemic

All of these events to me suggest claims that theatrical releases are dead are premature. I remain a buyer of $NCMI (check out my podcast with Diligent Dollar on National CineMedia and the movie space at large), $CNK and $IMAX and think Croods gives me additional conviction around these names.