1. New podcast episode on strength of box office and why the puck is going to the movies:

I was impressed with Cinemark and IMAX’s earnings calls this week and think the market is not pricing in the strength of the back half of 21 or 22. Once again, here are the shots on goal for movies hitting theaters in the next year or so: A Quiet Place II, Cruella, Black Widow, In the Heights, Peter Rabbit, Fast & Furious 9, Jungle Cruise, Venom, Eternals, Hotel Transylvania 4, Space Jam, Free Guy, Boss Baby, Ghostbusters: Afterlife, James Bond – No Time to Die, Suicide Squad II, Shang-Chi and the Legend of the Ten Rings, Dune, Spider-Man: No Way Home, Encanto, Top Gun: Maverick and sequels for Avatar, Black Panther, Captain Marvel, Aquaman, Jurassic World, Mission Impossible, Thor, Minions, Dr. Strange, John Wick and Indiana Jones and a Batman remake.

2. Check out IAC’s Q1 21 shareholder letter. If you own IAC shares, you’re going to get shares in Vimeo (which will trade as VMEO) on May 25th. The new IAC entity will be left with 2.5bn in cash and some interesting assets like DotDash, a media company that makes money off ads. I think there is a non-zero chance DotDash could be the next jewel in IAC’s portfolio, and I think Joey Levin tries to hint at this in the letter: 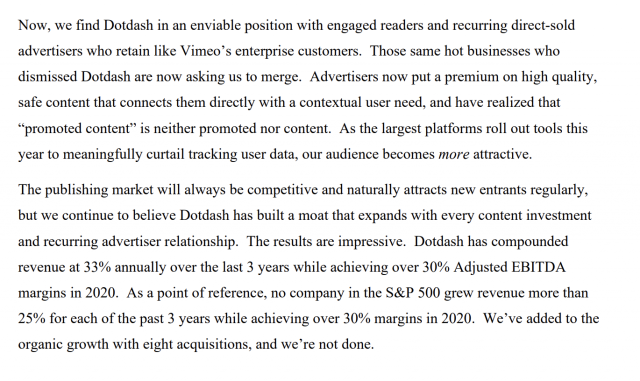 Similar to Berkshire and 180 Degree Capital Corp., I see IAC as a vehicle where a great manager with a unique strategy manages my money and generates alpha through their core competency. In the IAC case, that core competency is building great companies and spinning them off to the public markets. The returns speak for themselves (below also from their letter): 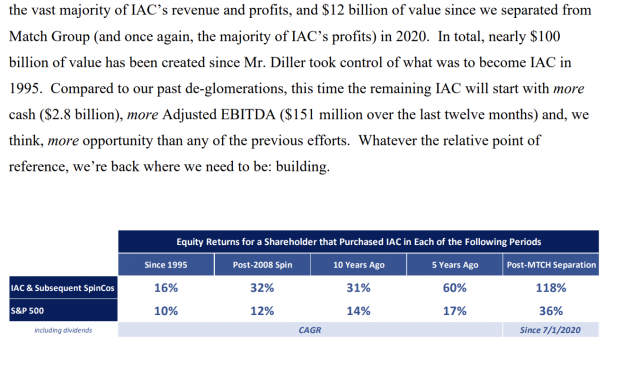 This is a permanent capital (hold forever) stock for me. I don’t see any reason IAC can’t keep executing on the Expedia / Match.com / Vimeo build and sell to public markets strategy forever. Let me quote Joey Levin himself:

With a forever timeline and a view that our shareholders will ultimately be the owners of each of our assets, we remain committed to creating things meant to endure market cycles, fads, and popular opinions.

I’d be amiss if I didn’t mention Angi (formerly Angi’s List), which will now be IAC’s largest asset and just got a new CEO. The company has performed below expectations on the business side (basically can’t monetize despite lots of inbound) and is going to require more capital. Angi is a turnaround story and I think there is a 50% chance at least it doesn’t work out. That said, I accept that in a conglomerate like structure some portfolio companies don’t make it. I think DotDash and some of IAC’s future shots on goal will more than make up for any ANGI disappointment.

3. Finally, Triton International is a container leasing company premium subscribers will be familiar with. I thought the company’s Q1 call was great and the stock is still a buy – the company is deploying a historically high amount of capex on long-term leases that CEO Brian Sondey says is a better use of funds than buying back stock or raising the dividend (both of which they could do): 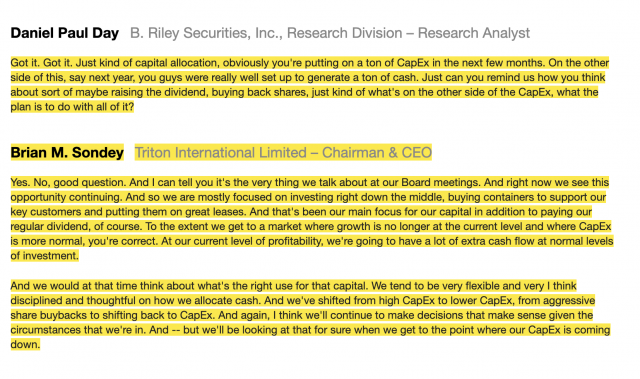 The way I see the above, the world’s leading container lessor with a history of excellence is telling you that they think they can make attractive leases right now that produce more value than just giving the money back to you. What this means is when circumstances flip (lease market is bad), Triton will give even more money right back to shareholders. Skate where the puck is going – some shareholders might be disappointed Triton isn’t bumping dividends or buybacks now, but I think in the future we’ll see even larger shareholder holders because they’re taking advantage of a strong market. I’ll leave you with a slide in the company’s Q1 deck that has me extremely excited as a shareholder. I love how this company thinks about capital allocation: 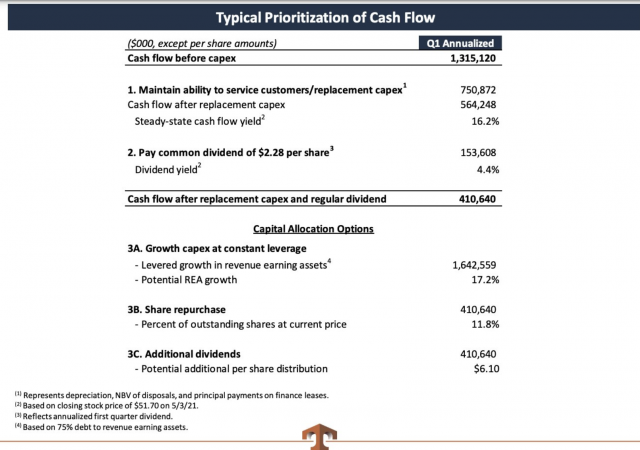