Despite the increase in network attendance, in-theater advertising revenue for the third quarter of 2021 remained significantly below historical levels… While the Company’s third quarter advertising revenue lagged the cinema recovery, the Company began to significantly reduce its cash burn rate and with stronger fourth quarter national bookings and a recovering local and regional business, the fourth quarter is shaping-up to be a turning point for the Company as it expects to achieve positive quarterly Adjusted OIBDA for the first time since the pandemic started.

“Media buyers wanting to confirm critical mass at box office before committing… the attendance of the last six weeks has put that concern to bed.”

“We expect the cash burn rate to decrease to a rate of $3-4mm per month and the fourth quarter is expected to be our first quarter of expected OIBDA… and expect positive free cash flow in 2022.”

NCMI has probably garnered the most coverage recently of any company I follow in this letter because it’s an underperforming stock in 2021 and the quarterly results have been poor. Q3 was no exception on that second part as the company is lagging the theater industry because advertiser demand lags more immediate economic recovery (ex. theater attendance).

So in summary, Cinemark about 50% off 2019 Q3 revenue and doesn’t need any capital; National CineMedia down >70% on revenue and seeking outside capital and amendments.

Even comping to 2020 which got the benefit of only one “normal” quarter, NCMI still remains well below historical performance levels: 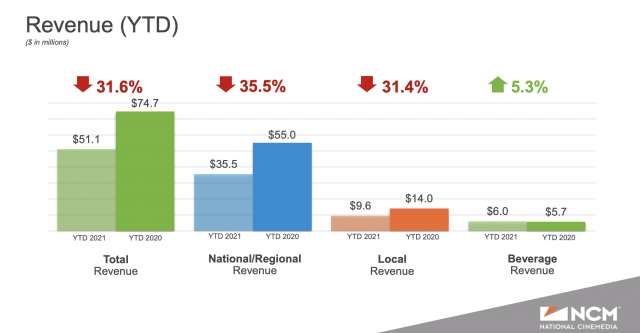 The revenue issues here in my opinion are largely due to the company not booking upfront commitments for any part of 2020 outside of Q1 as advertisers had no confidence in the movie environment. Historically, upfront has been 60% of NCMI’s revenue; they’re saying it’s finally starting to happen in Q4 and at 75% of 2019 levels.

If you want a quick explanation for why this stock has been in the penalty box, here are my thoughts:
– Quarterly financials aren’t showing evidence of a recovery
– Leverage and liquidity situations remain bad – company is 6x+ levered off historical OIBDA and 10x+ at present, company is seeking financing and trying to close before year end 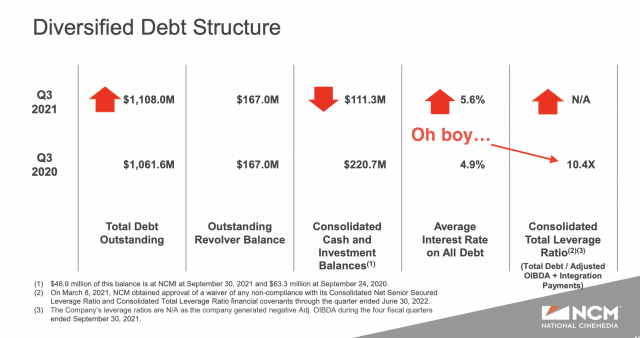 All of this is IMO reflected in the stock price, which has NCMI at a ~$315mm market cap. My last article discussed how price is a statement about what the market expects for future cash flows. Let’s start with the fact that in 2019 the company paid out $53.6mm in dividends alone to NCMI shareholders: 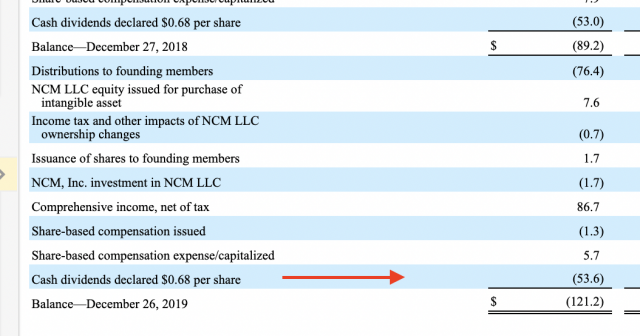 This was $0.68 a share, so at current stock price this would’ve been a 17% yield. Quick reminder here that even though NCMI (NCM Inc.) routinely in pre-COVID years did $130mm+ in FCF, it has to distribute ~50% to the founding members (which is you see that $76.4mm “Distribution to founding members”) so you have to haircut by about half:

With the monster 2022 slate on way (Avatar 2, Black Panther 2, way more, see below), I think assuming at least $50mm in cash to shareholders is fair. From Cinemark’s Q3 deck: 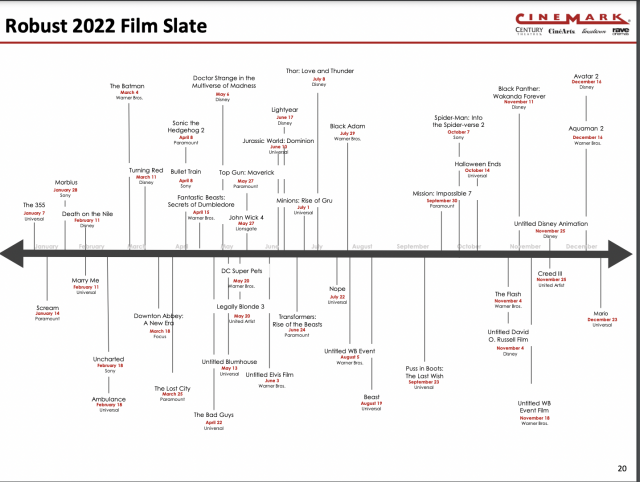 After that, bears are free to say “this business is 75% of what it was, let’s call it $37.5mm” and the IRR still works out to be positive:

I think this scenario is conservative and based on NCMI’s digital out of home division and changes to its cost structure during COVID, FCF could exceed 2019 levels for multiple years in the next decade. Granted, a lot of this depends on:

These are the risks you’re taking with the stock.

If you assume a more bullish average here of $50mm for the next 10 years, the IRR works out to 8% from here.

I’ve written before about covered calls, but remember that NCMI implied volatility is routinely above 100%, and you can decrease your cost basis while allowing for 25%+ upside to $5:

The December 22 $5 last traded at $1, meaning you can get your cost basis down to the equivalent of a $234mm market cap. In the aforementioned conservative case, IRR now goes from 2% to 9% assuming the stock isn’t called away:

So wrapping this up, NCMI still has an attractive risk / reward profile at the current price (especially with selling long-dated calls) and it’s highly likely the next 4+ quarters are very good. The company is finally booking upfront commitments (first time will be in Q4 post-pandemic) at 75% of what 2019 was. Consider that historically upfront v. scatter market is 60-40% on revenue split, I expect to see Q4 revenue way up sequentially and for 22 to be close to 19 levels.

I do think reflection on mistakes is extremely important and want to call out some weaknesses in my thinking over the last year+ of covering this company:

– I didn’t think enough about how advertising would significantly lag theater attendance. This in my mind is the reason NCMI has trailed gains in CNK and IMAX. NCMI wasn’t going to show recovery in financials until a few quarters after the theaters, and I should’ve thought about how this would impact the stock.
– I didn’t think about how leverage and liquidity would scare investors away here. NCMI now is raising liquidity for the second time since I owned it. The company’s working capital situation would’ve been evident from looking at the financials more closely, and I would’ve been able to get ahead of this:Due to the timing difference between the collection of NCM LLC’s accounts receivables and payment of various expenses, including debt service, we have received board approval to enter into a revolving debt facility between NCM Inc. and NCM LLC and to seek additional outside debt financing.This company charitably is 6x+ levered if you use historical OIBDA and 10x+ levered right now. My Netflixed review post went into how refinancing walls can crush companies and rightfully cause a discount on stock prices. While I acknowledge there can be good companies with bad balance sheets, the reality is leverage makes companies fragile to the capital markets shutting down and makes it harder for stocks you own to catch a bid and is yet another factor to watch. Which brings me to my final point…
– I didn’t think about the time expense of owning a battleground stock versus the upside. I have spent a lot of words and mental cycles thinking about NCMI, movie theaters, studios, the advertising industry, COVID and consumer behavior, digital out of home advertising and more. At the end of the day, this is an advertising business that depends on studios and theaters to generate FCF. It never really grew in the decade prior to COVID. Trading this was a “return to normal” story as opposed to “can grow forever” story. Additionally, this is a microcap that trades volatile as all hell. Too often I got fixated on price swings that were probably due to the realities of how small companies trade. Overall, I’d like to spend a more equal amount of time on all the names I follow and not get fixated on one company. In order to do this, I think in the future I want to target companies with fewer external dependencies and cleaner balance sheets (said another way, I want as few things to think about as possible). Lesson learned.

Other notes
– Company has completed “numerous” upfront commitments and thinks the upfront will be strong in the next few quarters. The current upfront is tracking at 75% of 2019 levels and 50+ national advertisers have committed. Called it “robust” market. They’re encouraged here and planning bigger pushes for 22-23 to sell upfronts.
– Q4 is actually the first quarter post-pandemic they’ve collected upfront and expect it to be 40%+ of revenue going forward, trending towards the 60-40 upfront-scatter distribution they’ve seen historically
– Opening remarks really emphasized weakness of linear TV market and cited it as reason CPMs for movie ads are affordable and strong alternative
– COVID is still impacting local businesses and resulting in weakness in local ads, although govt., education and healthcare have been resistant
– Company is launching “Cinema Advertising Management System” in Q1 22 that will allow for programmatic system. This could be a free call option, they think it’s competitive edge and plays well against iOS changes and are trying to lean into all the consumer data they’ve gathered. Company says data set will have 300mm data points by year end
– Scatter market has been strong so far in Q4 as also, partner committed to a platinum position
– The prized 18-34 male demographic the company played up as the most represented at post-pandemic movies (ex. ~70% of some new releases) and said it is a key part of why cinema advertising has value
– This was new CFO Ronnie Ng’s first quarter with the company , I would think he would’ve joined knowing they’d have to amend and extend with lenders
– On that note, CEO Tom Lesinki noted there have been a bunch of new additions to the senior management team. This could be sold as positive or negative but either way, interested to see how this team performs in the next few quarters
– “Bundled offerings” include social media and Tik Tok ads, they’ve been able to sell it
– Good back and forth on this call on theater access fees (paid 30 days in advance based on attendance) and advertiser payments. There is not an exact correlation between the two, so it is possible paying access fees isn’t necessarily followed by an increase in revenue
– They expect to get financing done in Q4 – this would be an amendment on their credit facility, a loan from NCM to NCMI and additional liquidity from a third party. Ronnie said this should be done before year end holiday season
– The 20mm revolver from NCM to NCMI from last quarter actually isn’t executed yet and should be done soon
– Marvel movies attract advertisers (I know, breaking news). That said, generally there is not a strong correlation between movie types and ad revenue, although again the 18-34 year old male demographic generally brings out advertiser demand