I want to set some expectations for this letter. Expect this to be 200-500 words and to take a few minutes at most to read. I’m writing this mainly for myself, so I want the charts and data to be interesting to look back on. I want to avoid doing daily analysis and instead work on identifying trends.

Here’s the first chart I want to look at. YTD returns for the S&P 500 by sector ETFs: 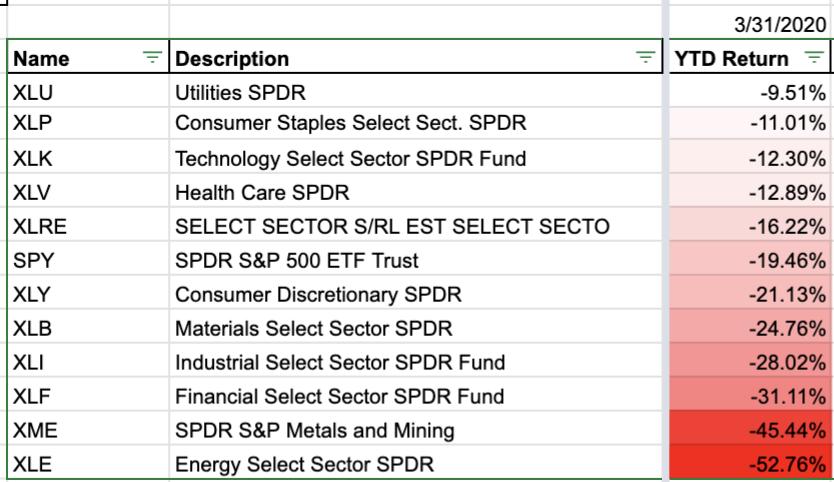 Utilities, consumer, tech, real estate and healthcare have outperformed the market; everything else has done worse, with energy being the worst.

I have a small script I run every day that adds a stock’s return over its 50 day moving average plus its return over its 200 day moving average. If you look at the top 5 names for market cap in the 95th percentile of market cap (this is arbitrary; I’m trying to screen out small caps that have surged due to a drug being approved as one example), you get the following:

The 5 worst stocks by this criteria look like this:

This aligns much more closely with the sector analysis; energy (XOM) and financials (XOM, WFC, TFC) are all in here, and BA falls into the industrials category. The underperformance of financials I find interesting and want to explore in later short posts. C, WFC and TFC all have over 4%+ dividends right now. XOM has a 9.3% dividend as of pre-market open today. What to make of all these companies with big dividends that seem likely to not cut them? Both WFC and XOM have AA or above credit ratings.

If XOM or WFC fall another 20%, the dividends look even more attractive:

Is it a sure thing that both companies can continue paying these dividends? I think it’s likely, but I promised this would be a newsletter about trades that have worked well. These two trades (XOM and WFC) have worked extremely poorly up to this point.