A good Sunday to all,

I’ve been reading Ben Carlson’s A Wealth of Common Sense and have been increasingly convinced that market timing is not a subject worth exploring in this newsletter (please see Stock Talk #5 for more on this). Carlson writes about the world’s “worst investor”, who does two things “well” (full blog post from him on this here):

His worst peak to trough periods look like below:

What’s amazing is this investor still turned 184K into 1.1 million. Writes Carlson:
The final investment was made in October of 2007 when he invested $64,000 which he had been saving since 2000. He rounded out his string of horrific market timing calls by buying right before another 50%+ crash from the credit blow-up… After the financial crisis, he decided to continue to save his money in the bank (another $40,000) but kept his stock investments in the market until he retired at the end of 2013… To recap, Bob was a terrible market timer with his only stock market purchases being made at the market peaks just before extreme losses… So how did he do? Even though he only bought at the very top of the market, Bob still ended up a millionaire with $1.1 million.
This story underscores to me that having a plan (never selling, consistently putting money in) matters as much as market timing. Carlson additionally notes that this investor would’ve ended up with $2.3 million if he had just dollar-cost averaged instead of trying to time the market.

Again, this story and the lessons within it seems particularly relevant during a time when most “experts” are suggesting the market has another leg down and to wait before deploying capital. Well, wait how long? I’m all in favor of deployment plans that lead to lower average cost of purchase (like dollar-cost averaging), but simply holding cash and waiting means you’re going to get probably a 1-2% return at best while you wait. It’s my opinion there are stocks and even ETFs available right now that 10x that return over a five year period. Which brings me to…

$CHEF and Small Caps That Will Survive

In my search for companies that have been the most beaten down by C19, I found gourmet food supplier Chef’s Warehouse (NASDAQ: CHEF). CHEF YTD (as of market close 3/9/2020) is down 66%, compared to -14% for SPY. What stood out to me while doing some screens was that CHEF outperformed SPY for most of 2018 and 2019: 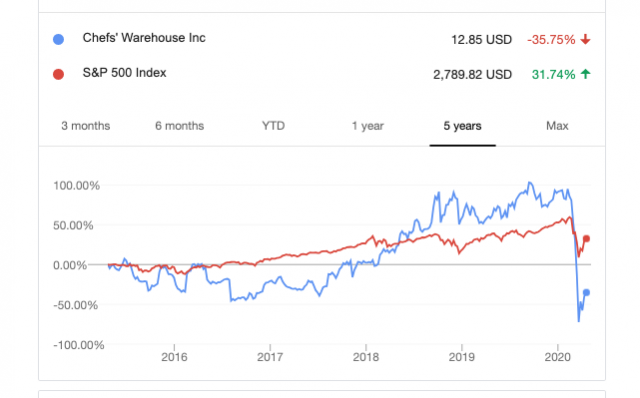 My theory on small caps and the market today that I talked about in stock talk #4 is that the market is pricing in a high risk of small companies going to zero. Either that, or markets are making the assumption that these stocks really are 1/6 to 1/10+ of their pre-C19 value.

In the case of CHEF, I think the second assumption is invalid. CHEF’s customer base is extremely well diversified, and its customers include chains, grocery stores and established independent brands. The company’s top 10 customers were less than 2% of Q3 2019 sales. Some of the company’s customers definitely are at risk or will be decreasing demand for 6 months to a year (specifically Royal Caribbean), but the names below are so well-established I expect most or all of them to be around post-C19: 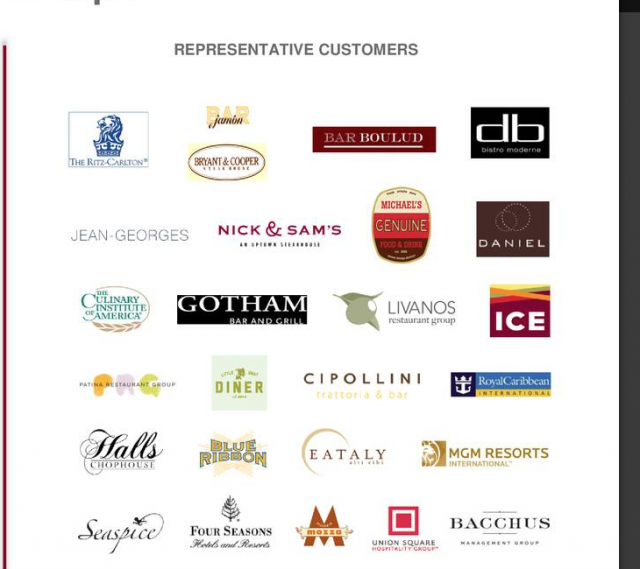 CHEF also has been active in making value-add acquisitions over the years, and recently acquired Sid Warner & Son (closed January 2020) and Cambridge Packing Company (closed February 2020). Both companies have large presences in New England and will allow CHEF to expand its customer base in the Northeast.

The point I’m making here is that CHEF pre-C19 was bullish on growth in new markets  and over a longer time horizon will in my opinion grow earnings from 2019 levels. Sure, the market could assign it a lower multiple, but one that was 1/6 of its previous value? I don’t agree that a post-Corona CHEF will have that terrible growth prospects.

CHEF on 3/18 filed an 8-K that linked to a press-release with the following:

RIDGEFIELD, Conn., March 18, 2020 — The Chefs’ Warehouse, Inc. (NASDAQ:CHEF), a premier distributor of specialty food products in North America, today announced that on March 18, 2020, the Company borrowed $100 million under its $150 million Asset-Based Loan Facility, maturing in March of 2022. Inclusive of this borrowing, the Company has approximately $175 million in cash on its balance sheet at this time. The Company took this step to maintain appropriate liquidity during this period of extreme uncertainty.

In terms of non-debt maturity commitments coming due in 2020, the company also breaks this out on their 10K:

Survival Prospects – CapEx and Other

The other relevant consideration here I think are capital expenditures and other expenses. CHEF has to pay salaries, insurance, buy raw ingredients, etc. Normally, operating cash flows would cover some of this, but the draconian scenario I’m trying to do for my entire portfolio is to assume zero revenue for Q2 and Q3 2020.

Let’s start with looking at 2019 cash flows for CHEF – this was actually a year they added $97 million in cash: 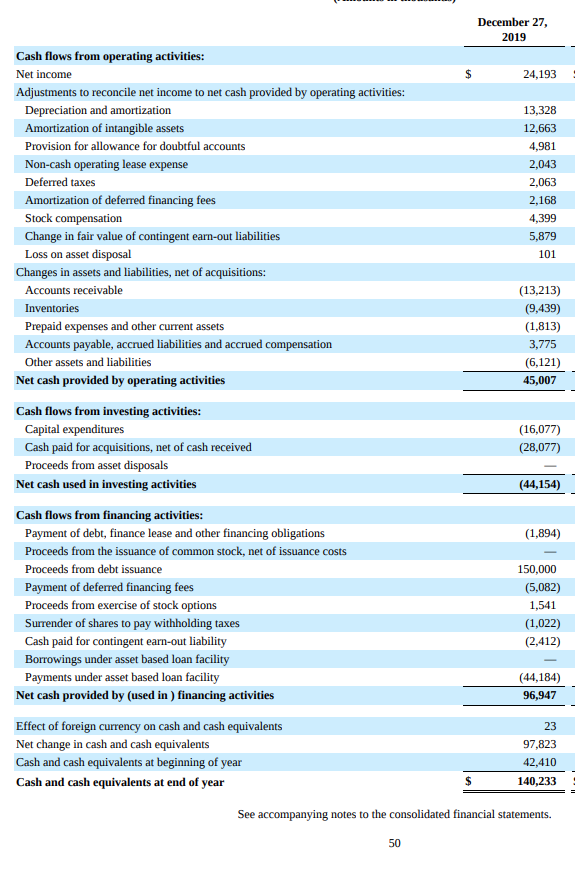 The main source of cash here is the $150 million proceeds from debt issuance – it’s possible CHEF raises capital this year, but I’m going to assume it doesn’t based on the current environment we’re in. I also doubt CHEF will be making acquisitions, so the $28 million expenditure falls away there as well. CHEF does provide guidance for 2020 capex in its 10K:

Our capital expenditures, excluding cash paid for acquisitions, were approximately $16.1 million for fiscal 2019. We believe our capital expenditures, excluding cash paid for acquisitions, for fiscal 2020 will be approximately $38.0 million to $42.0 million. The increase in projected capital expenditures in fiscal 2020 as compared to fiscal 2019 is the result of planned expansions of several of our distribution facilities. Our planned capital projects will provide both new and expanded facilities and improvements to our technology that we believe will produce increased efficiency and the capacity to continue to support the growth of our customer base.

So capex I don’t consider a huge concern here – even if CHEF has to spend $42 million (which they definitely won’t – it seems fair to assume some of those distribution facility expansions can be put on hold), there’s still a good amount of breathing room.

What does worry me a bit are CHEF’s operating expenses. From the 10K:

Operating expenses. Our operating expenses include warehousing, protein processing and distribution expenses (which include salaries and wages, employee benefits, facility and distribution fleet rental costs and other expenses related to warehousing, processing and delivery) and selling, general and administrative expenses (which include selling, insurance, administrative, wage and benefit expenses, share-based compensation expense and changes in the fair value of our contingent earn-out liabilities).

Not all of these expenses are cash (ex. they note 8 million is “re-valuation related to Del Monte earn out liabilities”), but on a yearly basis this is still a huge number: 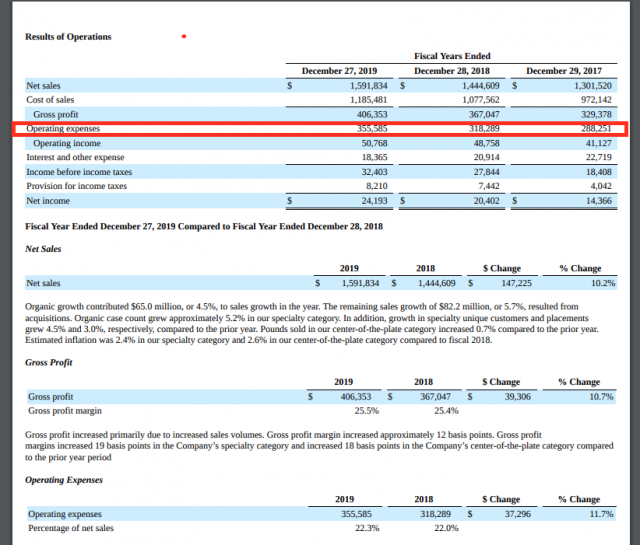 I think this could be what is causing concerns about whether CHEF can make it through this – if you haircut this number by 67% (assuming I’m not double counting), it’s tight for CHEF:

To be clear, I think there are a ton of issues with the cash operating expenses analysis here. There’s a reason in the screenshot above CHEF breaks out operating expenses as a percentage of sales. How many people you hire, how much space you buy or rent, etc. are based on expected sales. If CHEF expects to do nearly zero in sales for three quarters, it’s going to furlough or lay off employees and potentially do things like delay rent payments or sell assets it doesn’t need anymore.

I also don’t think CHEF’s sales will be zero. Some of its brands supply super markets (an area where companies like Kraft Heinz have seen growth in sales during C19), and I think restaurants will open back up in a limited fashion in May or June. Restaurants at present are still delivering via services like Uber Eats. Because of these factors, I think making operating cash expenses 1/3 of what 2019 operating cash and non-cash expenses were is fair, and maybe even too draconian. Note that in the above I also took the high end of capex for 2020.

I also assumed that CHEF wouldn’t raise capital for the rest of the year. I don’t think this is a fair assumption. The cruise lines were able to do this in March. In an emergency situation, I belief CHEF could do the same. There are presumably also government aid programs it could draw on.

What You’re Paying for This Company

Overall, I’m confident CHEF will survive 2020 and return to somewhere close to its expected growth in 2021, 2 or 3 – if you assume this can happen, the company to me is a strong buy at its current $392 million valuation. In its last investor presentation, the company projects $115-$125 million of adjusted EBITDA in 2-3 years, and $300-$350 million of EBITDA in 5-10 years. These are long time horizons where anything could happen, but if the company gets anywhere close to these numbers, the stock is cheap right now.

Let’s assume a 10x EV/EBITDA for a food supplier, and use $252 million for net debt ($392 million in LT debt minus 140 million in cash company had as of end of 2019) and look at CHEF’s valuation using this multiple (conservative) and 15x (closer to industry average in normal market in my opinion): 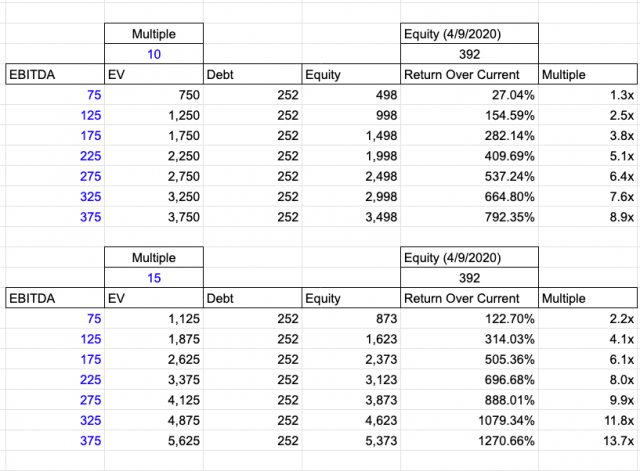 CHEF in the next 5-10 years to me is a possible ten bagger if it gets to its guidance from its last investor deck. I feel confident it will survive 2020 and offers great value at its current price.

What excites me is that there is a ton of companies with similar stories. The market is assuming on a valuation basis that many retailers, restaurants, travel companies and more will get nowhere close to previous long-term guidance. Until C19 ends, the looming threat of bankruptcy is going to hang over these companies, and that to me presents a massive opportunity.

I’d love to hear what others are picking up in this market and feedback on my CHEF analysis above. Reply to this letter and let’s talk stocks.