180 Degree Capital Corp. (TURN) is a microcap ($75mm market cap as of 5/5/21) publicly traded closed end fund that owns public equities, cash and some private companies. I’m a big fan of the CEO, Kevin Rendino, who I think is a shareholder-first capital allocator and wrote about in Management Groups That Make Decisions Easy For You. TURN has changed a lot over the years since Rendino took over in 2016/17 (joined board, became CEO respectively). Before Rendino, the company was a Business Development Corporation (BDC) that struggled as a publicly traded company – they switched to a close end fund under Rendino to restructure (closed end structure has lowered expenses among other things) and allow him to take over the existing private assets and invest in public small caps, which is his core competency.

Rendino since he took over has kept restating that the mission is to make TURN more and more a pure play on cash and publicly traded small caps. From his 2020 letter:

Since then, the company on April 5 put out an update on its Q1 performance where it stated:

“We are proud of the performance of our public investments during the first quarter of 2021,” said Kevin M. Rendino, Chief Executive Officer of 180. “Our preliminary +28% gross total return equates to an estimated increase in value of approximately +$16.6 million, or +1.60 per share. We ended the quarter with approximately $74.0 million in cash and securities of publicly traded companies, or $7.13 per share, an increase of approximately 24% from the end of 2020. We note that these results include a preliminary fair value of our restricted shares of common and convertible preferred stock (on a converted to common stock basis) of TheMaven, Inc. (MVEN) at $0.7869 per share versus the closing price of MVEN’s common stock on March 31, 2021, of $0.91 per share.”

“We have begun the process of valuing our privately held companies as of the end of Q1 2021,” continued Mr. Rendino. “As of December 31, 2020, our privately held portfolio was fair valued at $38.7 million. As we noted in our last shareholder call, we remain cautiously optimistic regarding the potential for monetization events in our private portfolio to occur in 2021. With the information available to us as of this release, and inclusive of normal levels of operating expenses and accruals for potential year-end bonuses, we believe the gains in our public portfolio will lead to an increase in our net asset value per share (NAV) as of March 31, 2021 from $9.28 as of December 31, 2020.” Guess what the stock currently trades at? $7.28, or barely above the cash and public securities. Sure, valuing the private portfolio is hard, but if we take management’s word for it, it’s fair to conclude there is at least a few dollars of value there. Management in its Q&A for shareholders at the annual meeting had some specific commentary here (guess how many shareholders asked questions? One. No one is paying attention to this company) on just one private company (their biggest) that says they think that portfolio has at least a dollar of value:

And the second part is, we think AgBiome is a wonderfully run company that’s in the right area of the world, feed the world. And we remain very bullish on the prospects for that company. And obviously, it’s our biggest private holdings by a fairly substantial amount. So we certainly feel good about that one. And we recognize also that, as you know, Adam, we’re very deliberate about what we say in terms of where our cash and liquid securities are. And our stock price now is trading at our cash and liquid securities, not at a discount, well, not at a premium, but at it. And therefore, the entire private portfolio is being valued at 0. And we don’t share the same views of every single one of our private holdings. But AgBiome’s value is $1.30 per share, and it’s worth $1.30 per share in my mind, at least, as we look out the next few years.

So, in my mind, it’s likely TURN should trade at near $10 or so ($9.28 NAV as of 12/31, public side increased by 28% to $7.13, private as of 12/31 was ~$3.62 (40% private value in slide deck * 9.28), so new NAV by my calculations is $10.75). Note the company has historically traded at a NAV discount, likely due to investors being skeptical of private valuation. The existing NAV discount is ~32%. The stock trades at 68% of its NAV, which is on the low end of the chart below (remember that over time TURN has increased its share of public securities as % of total value, the market has ripped, and the company has not marked down its private portfolio in aggregate): 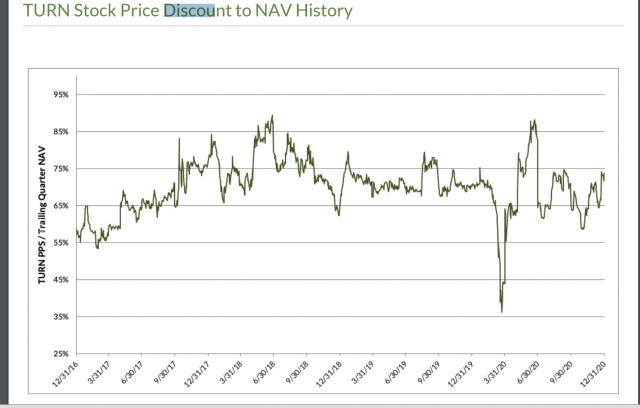 That private portfolio discount doesn’t matter here though, since in the trade I’m making I believe you can buy NAV below the cash and public securities (public NAV) value. If you sell a TURN May 21 put at a $7.50 strike (the company should report earnings in the next few weeks, so this has volatility value backed in), you get as of yesterday $0.40 in premium:

Want more convincing that this is a great value? Check out the insider buying activity on TURN – yep, throughout March, insiders bought again and again at the $7.30s. This company has the most bullish insider activity I’ve ever seen (years of buys only).

In closing, I think buying TURN or selling TURN puts presents an opportunity to buy a stock at a substantial NAV discount under a great manager. I attribute this discount existing due to the company being a microcap with few analysts on any calls and the market believing the private portfolio has no value. I think this discount will close because Rendino is aware of this perception and year after year makes the public portfolio larger. I didn’t even talk about in this post that the that the company has founders shares in an upcoming SPAC and manages money for a separate account (which could turn into more accounts) it can generate income off of. I’ll save that for a future post.